Black and white, good and evil, fire and ice - these opposing forces often find themselves in conflict. But today, the Fire Mage and Ice Mage must work together to travel a land of trees, rivers, and mysterious portals.

Art by CptBlackPixel, coding and design by Joshua McLean.

See controls in-game by pressing F1 on the keyboard or Start on your gamepad.

Note: The game lies about camera controls. It's on the shoulder triggers (LT/RT). Also, you can't use the stick to move. There were issues with the new input system.

Bugs? Let us know! Thank you for playing. :)

Linux and Mac builds are untested.

If you beat the game really fast, you might get cake.

Protip: The cake is a lie.

It's pretty easy to slightly veer off course when you're building ice bridges and waste mana, which causes a restart. The only way I could think to fix that though is either press the cast spell button to place ice, or change the movement system.

The xbox controls were pretty strange -- I would have expected the analog sticks to be used for both movement and camera.

Hey thanks for playing! Agreed on the stick controls - that was the original intention but the new input system wasn't reading them as expected so I just changed it.

Also spot-on with the accidental ice bridges. Having the Ice Mage cast to freeze them would be a great solution. 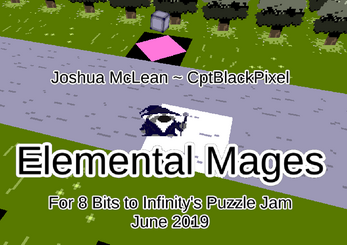